Wow, who’d have thunk it – showing concurrently in two Regional Galleries during the Prowl of the Pandemic. Logistically a wee bit awks, but at least in the case of Wagga Wagga we might just be able to manage a gallop across the mountains before the exhibition closes…

Curated from the National Art Glass Collection, You can’t see White, if you won’t see Black seeks to comment on the coexistence and unity of opposites as well as duality in politics, spirituality and morality.

Day, light, and good are often linked together, in opposition to night, darkness, and evil. These contrasting metaphors represented as White and Black go back in human history, and across cultures, including in the Judeo-Christian tradition, ancient Chinese Yin and Yang and ancient Persia.

As seen in this exhibition, the use of black and white creates a focused attention upon content, form, pattern, texture or upon the way in which the object has been made. Glass itself presents as a particularly expressive medium to explore abstract ideas. Both solid and fluid, glass absorbs and refracts light, and in so doing communicates spiritual purity and intensity of feeling, such as the oneness of the universe might be felt.

About the work (brief statement from Megxx)…

Post Modern Tokenism III comes from a series of work alluding to the perniciously capricious nature of public displays of respect for our indigenous citizens – wheeled out when it suits for gala events (like the opening ceremony of the Sydney Olympic Games) and then shoved back into the gloom the moment the scrutiny is past. They emerge and fade from view as pomp and circumstance/politics/the marketplace dictates. It’s unconscionable.

Harbinger, the exhibition curated by Nicola Dickson and currently showing at the Mildura Art Centre, has been in gestation for two and a half years – a period of time that’s been beset by unprecedented calamity; the fires of the 19/20 Black Summer, the now ubiquitous Covid pandemic, the ever worsening continuum of global natural disasters, several tangos with mortality (…and, god forbid, we mustn’t forget the gruesome political distraction of bloody Donald Trump.)

It’s certainly been swings and roundabouts and a seemingly endless string of relentless handicaps (not least being the on-off-on-again lockdowns in Mildura itself ) But all of that notwithstanding, and regardless of the associated nail biting, it’s been wonderful to be included in such good company (Di Fogwell, Steven Holland, Tiff Cole, Reuben Lewis and, of course, Nicky herself.) And in the current social climate it’s a privilege, let’s face it, to be able to show anywhere at all!

So we’d been quietly beavering away, in the solitude of our studios, whenever we’d been able. But hadn’t during that time posted even an inkling of the work in progress…mainly because we didn’t want to mozz the outcome.

Nicky had first pitched us the show in 2019, and what could we possibly not love about it! For one, it showcased birds; an enduring preoccupation of ours. For two, it interrogated the loss of habitat due to encroaching industrial/creeping domestic development. For three, it equated the destruction of the environment with the distress and endangerment of birds and exposed the clear, present and accelerating danger of Climate Change. Ticked all our boxes.

The imperilment of birds is a complex, multi-layered dilemma, though the cause and effect is a simple enough equation. In taking over their habitats (a harsh enough impingement), we have compounded the destruction with intensive industries that ramp up pollution and ruination in a ripple effect that has burgeoned into the perfect storm of Climate Change. Extreme weather, drought and fire events have become our new compounded normal.

Living in the splendid climes of the Far South Coast of NSW, we’re quite besotted by birds of every feather; whether in their wild habitats or in their imposed urban adaptations. They are bright, intelligent, sociable creatures – full of purpose and existential imperative – and vulnerable to the progressive plunder and degradation of the planet by that higher, entitled order, the homo sapien. The very existence of birds is now literally on the line; we haven’t just trampled across their delicate ecosystems, we’ve brought upon them the mother of all catastrophes, looming extinction. It’s been an insidious evolution, but when we get to the stage of people asking ‘where have all the sparrows gone?’, then it’s fair to say that we’re reaching a tipping point.

In our small corner of paradise, a diverse agricultural and bush environment caught between heavily forested mountains and the ocean, it’s not hard to see the cause and effect of ‘civilisation’ on our rich avian wild life. I’ve witnessed firsthand the degradation of the forests brought about by clear-felled logging; the rubbish left, banked-up, to fuel ever more intensive fire storms. The habitat of the Barking Owl has been cleared for Big Agriculture, serious conservation efforts are in place for the Red-Tailed Black Cockatoo, the Regent Honeyeater has been pushed to the brink by the creep of urban and industrial development – all common scenarios that are echoed across the nation. We reap what we sow.

As Ye Reap will continue to be a work in progress; the disastrous management of the Nuclear (Fukushima) and Fossil Fuel industries, for instance, are just two of an ongoing parade of medallions already on my drawing board. Spare a thought for the birds.

Living in the hinterland of the Far South Coast of NSW, wild birds are our constant companions. They hang around us when we’re in the garden, often wandering into our studios. Some are permanent fixtures in our lives while some swing through for a few weeks on their seasonal transit, regular as clockwork. So we’re acutely aware when there’s a shift in the natural order of things.

The Jaded Passeridae (a play on monumental masonry) alludes to the relatively recent universal query, ‘where have all the sparrows gone’…when we suddenly realised that our very own cheeky garden flock, in residence for 40 years, was indeed missing in action.

Against All Odds (scorched earth: burnt offering from the fire ground) conjures the New Year of 2020 which found us in the eye of the fire storms, stalked for 40 days by the Mother of All Conflagrations. It was terrifying, not least for the critters. Much of that time was spent in the thrall of the Bushfire Apps, glued to the relentless advance of those dreadful ‘hotspots’. Yet, finally, in the midst of the loss there emerges sweet and delicate survival.

The Owl and the Pussy-Cat: end play follows the fortunes of Edward Lear’s beloved children’s poem − though not, alas, to the anticipated Happy Ever Afters.  Instead, the moon-struck couple meet a watery end; caught haplessly adrift (shades of sea-level rising and doomed Kiribati) on the crown of a drowning palm tree.

There’s little charm, for sure, to be found in Climate Change.

For the many of us who were prevented from visiting Mildura in the flesh (courtesy of lockdowns and border closures) the virtual tour below, narrated by Nicky Dickson, is a cracker substitute…

Special thanks to Studio Bitch and the support crew:

…and Old Mate (in memoriam)

Please note: we will be putting together a more fulsome post of the exhibition – featuring all the works in the show – for Glass Central Canberra a wee bit down the track. n(Ed)

After a long, drawn out 15 months that morphed from terror (aka Black Summer’s Mother of All Conflagrations) into a pervasive and enervating state of uncertainty (aka Covid-19), we are finally…cautiously…re-emerging.

What a peculiar ‘new normal’ now faces us all, with tectonic shifts on the geopolitical stage, socio-economic injustice and vulnerability more starkly exposed than ever before and the integrity and decency of the political class (once again) in absolute tatters. The perfect storm of climate change and pandemic has toppled the precarious house of cards that was the latest version of the Patriarchy’s New World Order. Has capitalism finally corrupted The System beyond repair and sent us all to the dogs? Very possibly. All of the above notwithstanding, we’re just going to bury ourselves in the studio and attempt to ride it out.

So, back to business…

We’re kicking the year off with our perennial obsession, Ned.

“Deep in the nether regions of The Melbourne Club, hidden behind fortified baize doors in the inner sanctum of the cohort’s secret Trophy Room, hangs the club’s most hallowed prize; the death mask of Edward (Ned) Kelly. Indeed, it’s a barely acknowledged fact that the very campaign to outlaw and hunt the notorious bushranger was conceived within, and directed from, this most august establishment; key players in the affair – Sir Redmond Barry, Frederick Charles Standish, et al – being not only eminent members of the club but also high ranking brethren of the Masonry.”

Jerusalem: Hava Nagila, is Megsie’s response to Trump and (subsequently) Morrison’s decision to move their respective Embassies to Jerusalem; a provocation that will inevitably trigger dire repercussions in the perpetually fraught Middle East… 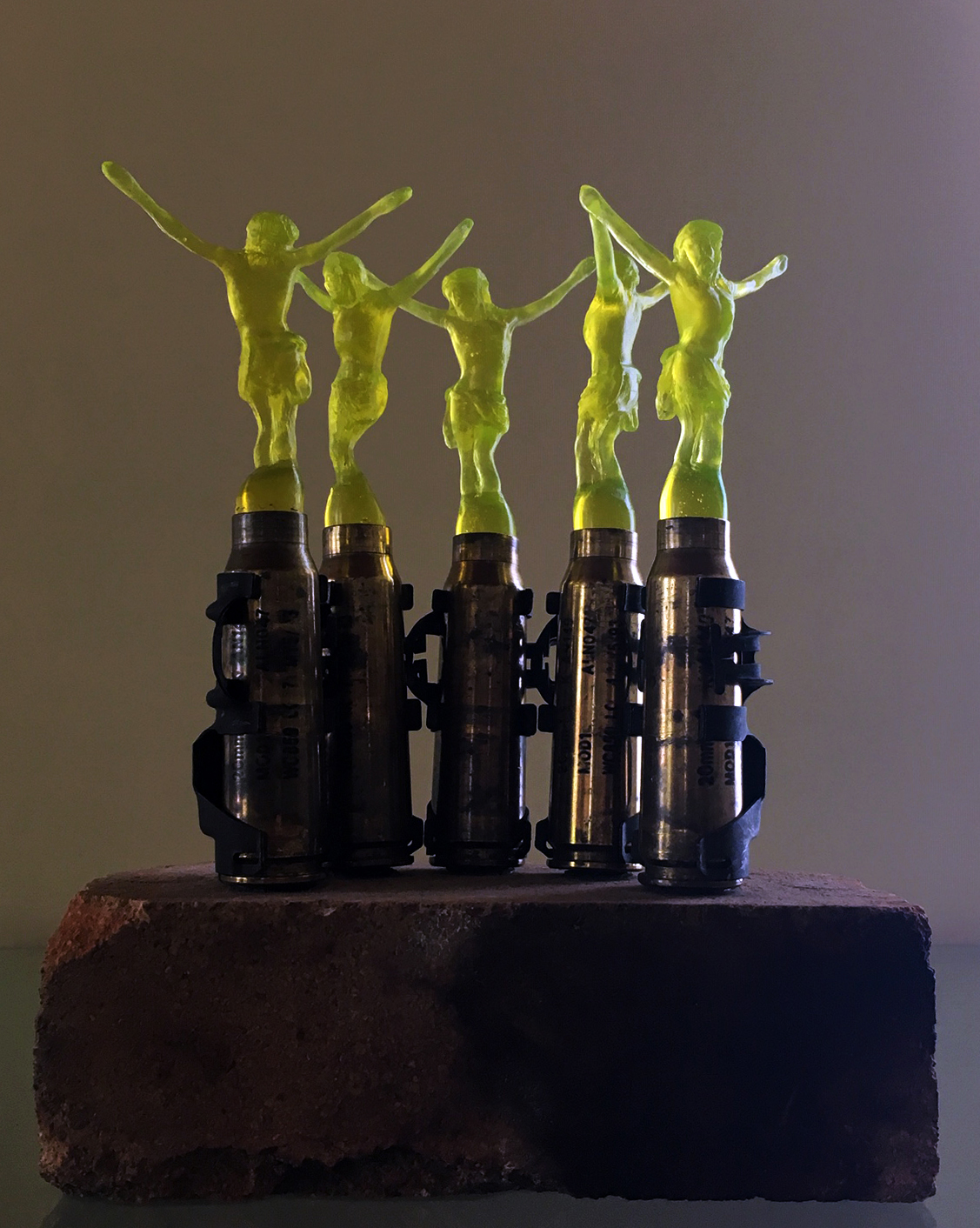 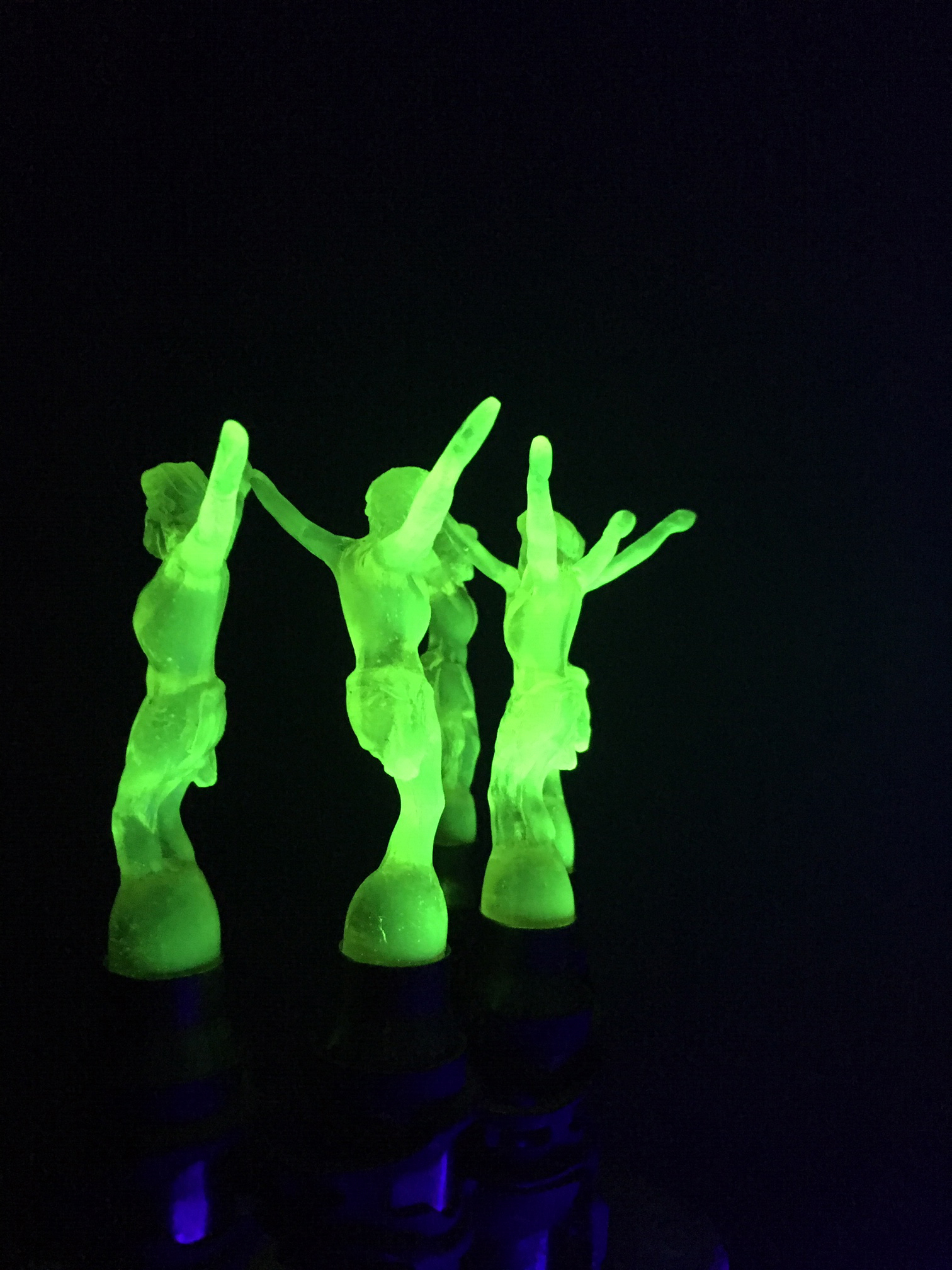 Historically the political wounds are dark and duodenum deep; the Wars of the Crusades, and every military offensive and unwelcome interference since, are now overlaid with clear and present danger and increasing affront. In this piece the celebratory dance of the Hava Nagila evokes strains of whirling dervishes, and the ammo is an intemperate live-fire exercise underscored by the unholy spectre of nuclear ‘treaty’.

The horse trading over such a universally emotive site as Jerusalem is unbelievably outrageous in itself. To Donald and Scomo: a pox on both your houses.

[And now Golan Heights! This is what happens when a fool is handed the keys of high office. And as for Pompeo’s gormless remarks about Trump being sent by God….!!! Come on America – time to dig out your moral compass. Please. (n)Ed]

Wedding bells and happy ever afters; the continuing tale of the Owl and the Pussycat… 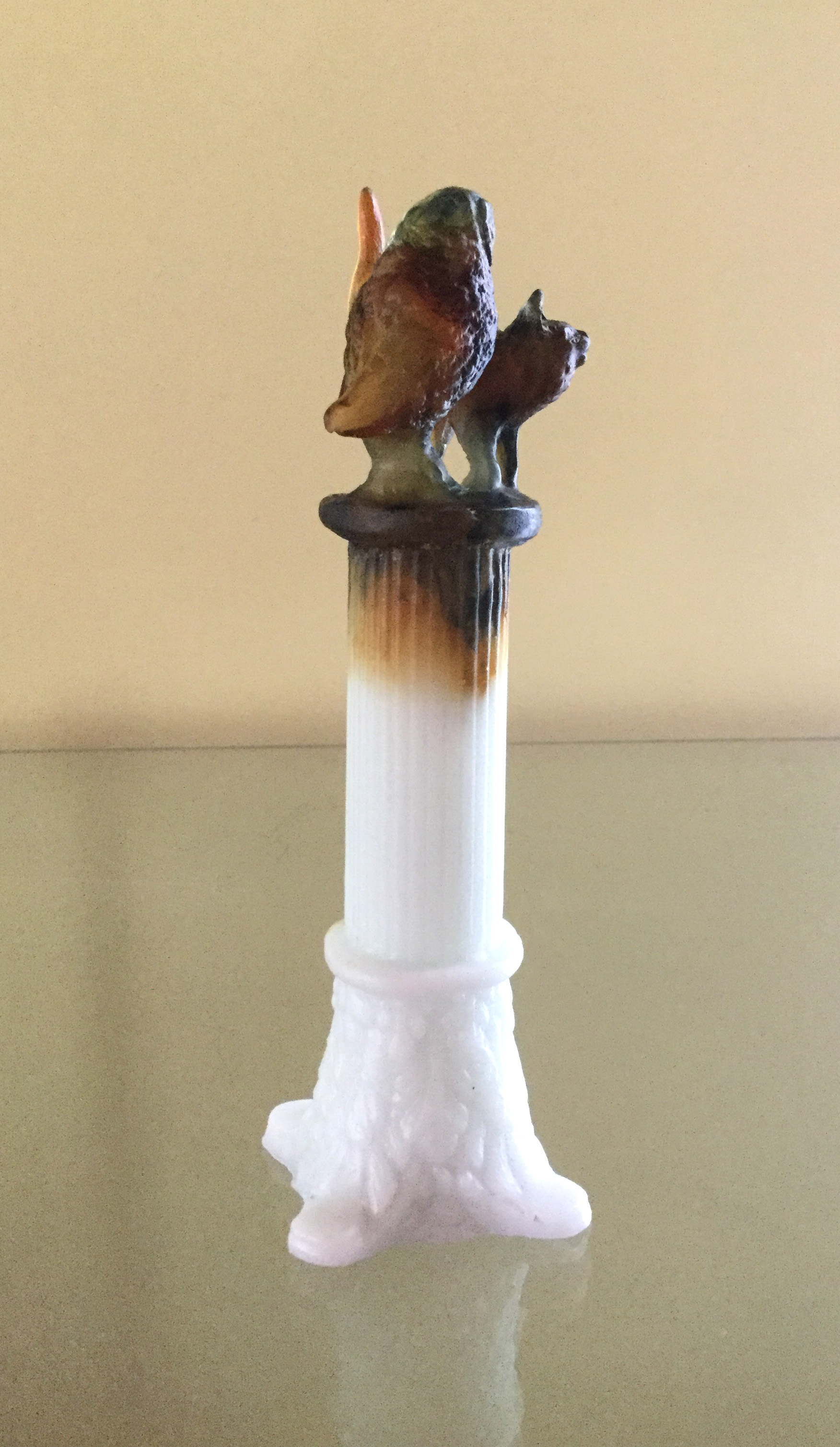 Megan Bottari, Happy Ever After (from the Owl and The Pussycat series), lost wax cast Australian lead crystal

And anchors away for a lazy cruise across azure kelp beds… 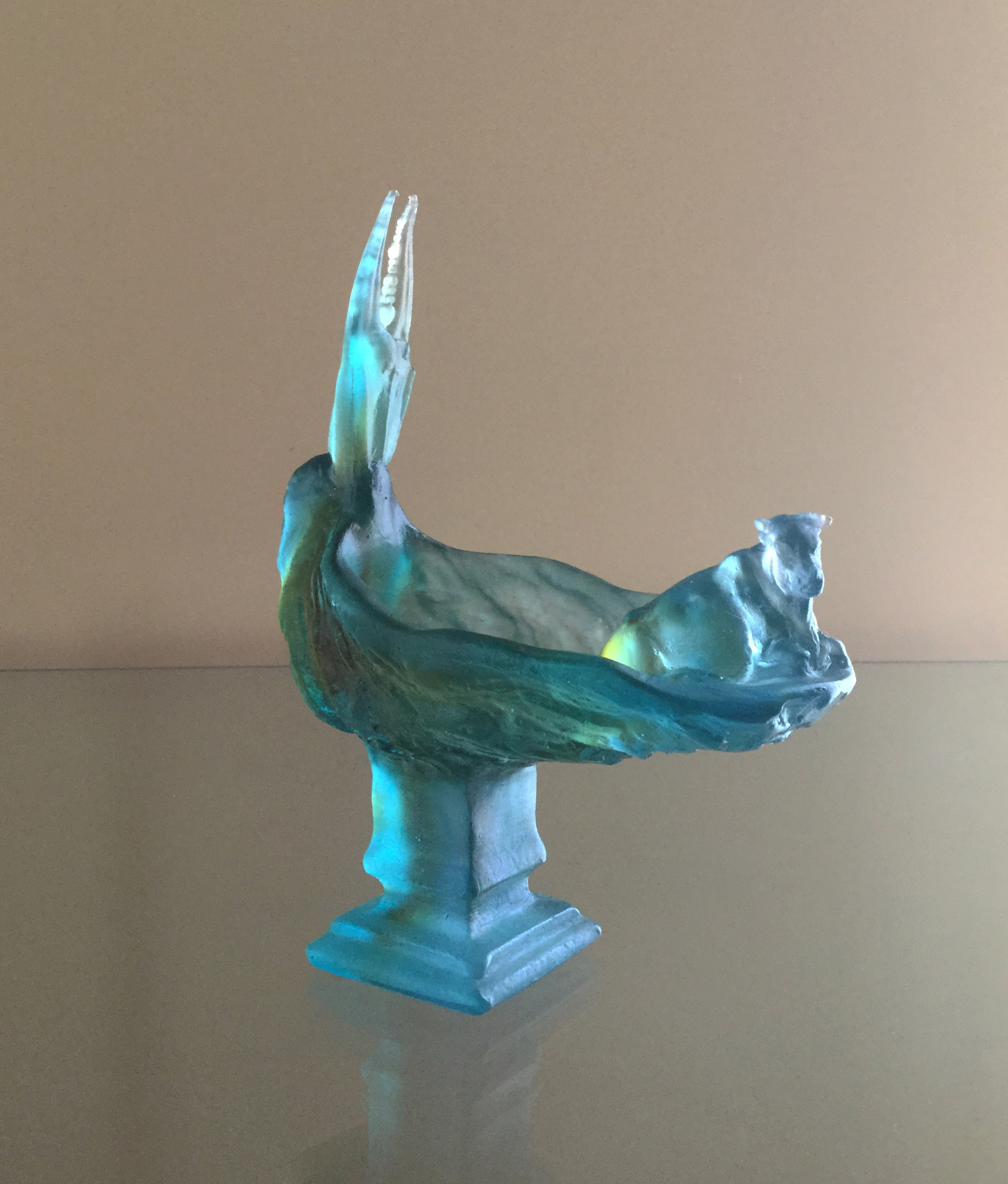 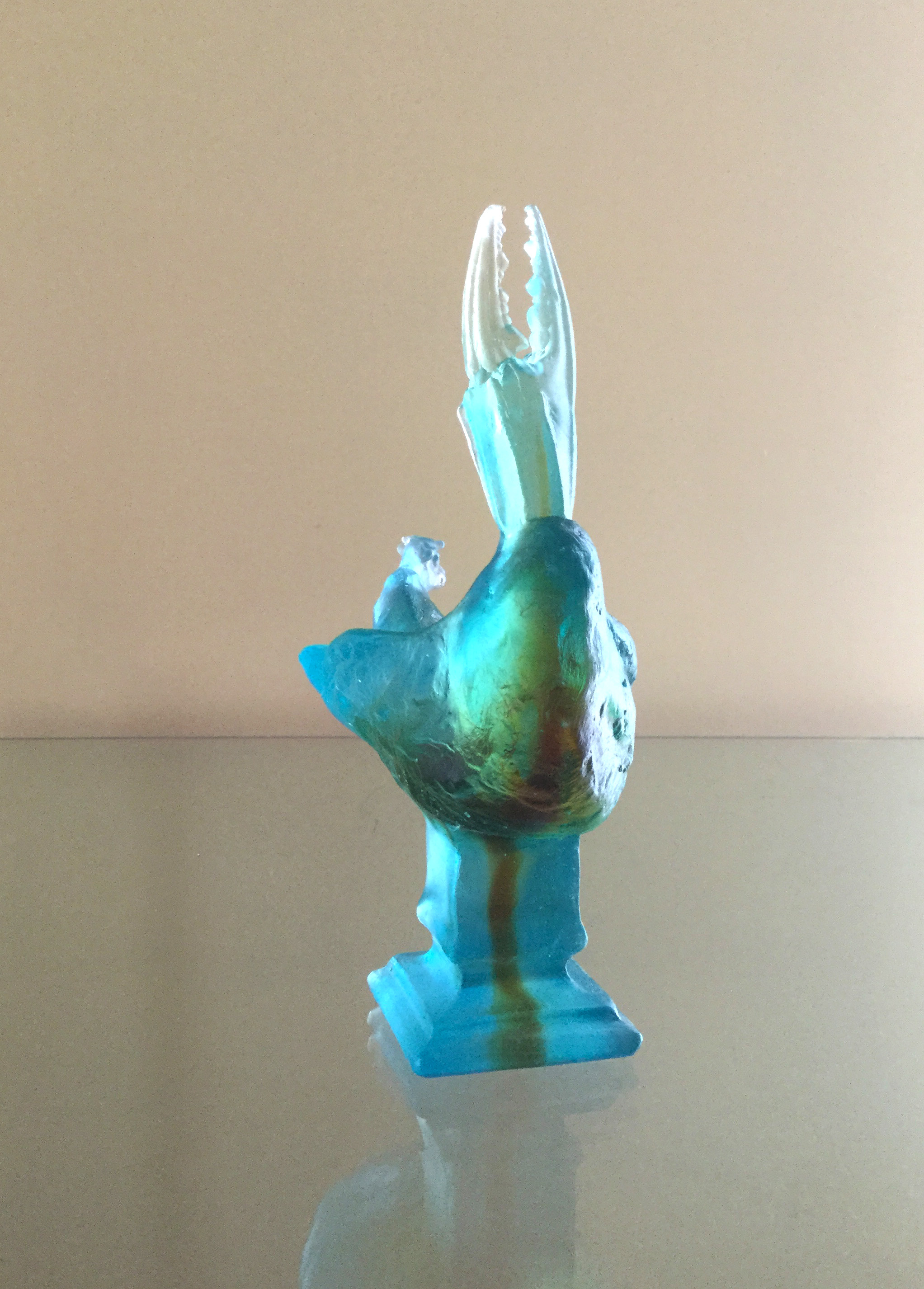 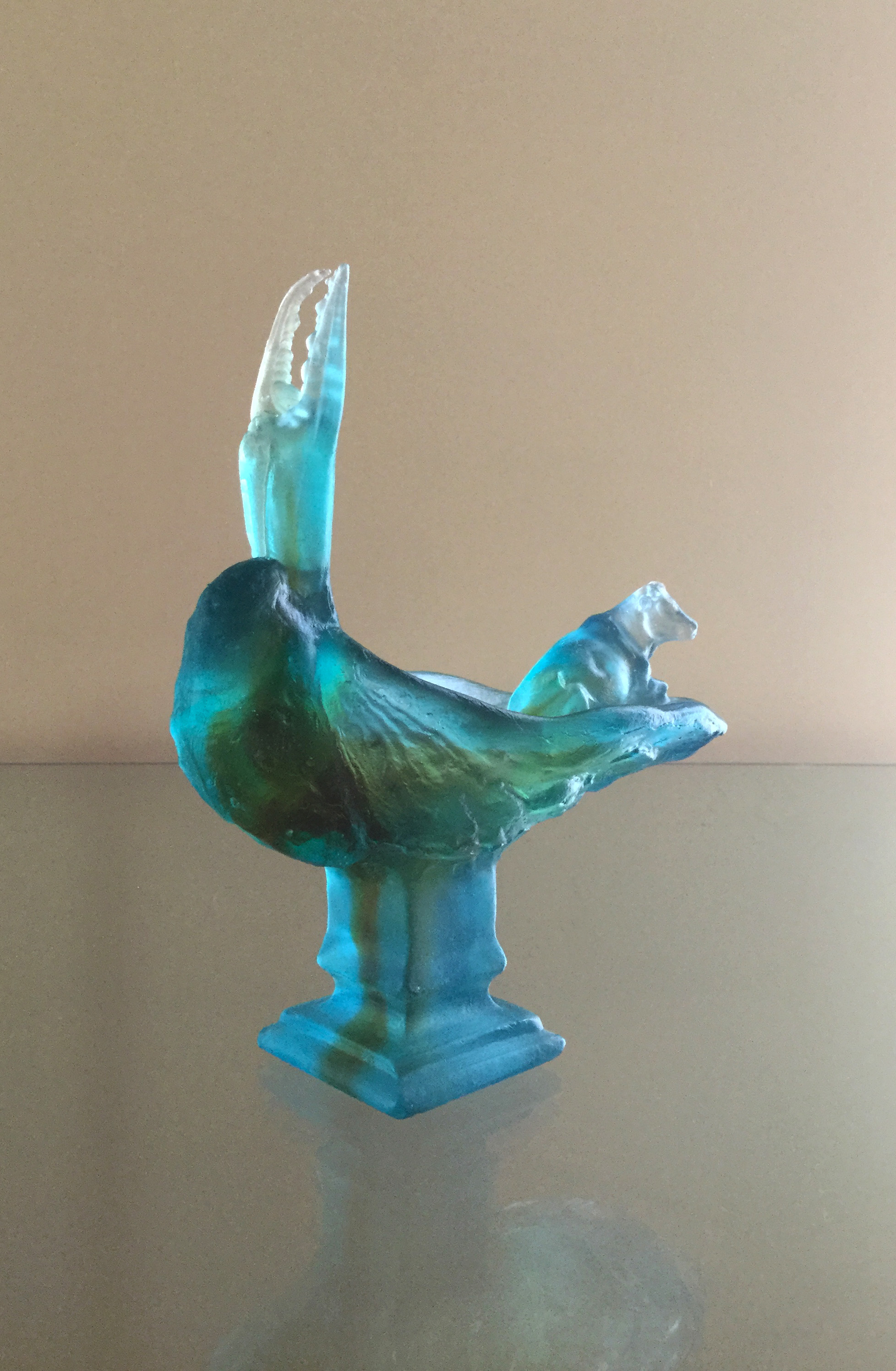